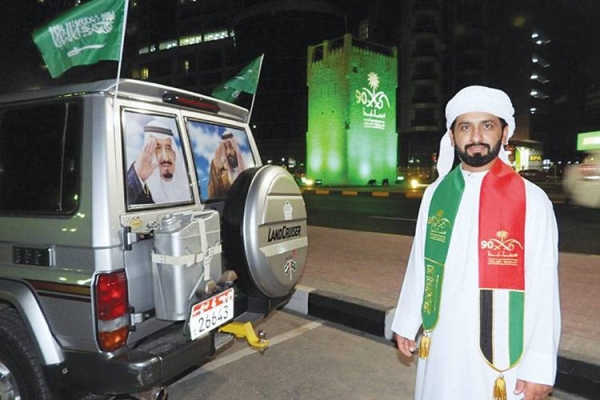 SHARJAH — A young Emirati, traveled over 1,100 kilometers, navigating across the seven emirates to celebrate the 90th Saudi National Day and to express his and his country’s solidarity with the Kingdom, Gulf Today, a Sharjah-based newspaper reported on Thursday.

Rashid Aziz Al Shehi decorated his own vehicle with pictures of the Saudi leaders, symbols, and the national flag before he embarked upon an extraordinary journey with the slogan ‘An Emirati is Saudi and a Saudi is Emirati’.

Al Shehi’s trip started from the western region of Al Dhafra, and moved to Abu Dhabi, Dubai, Sharjah, Ajman, and Umm Al Quwain before landing in Ras Al Khaimah. He then proceeded to Khor Fakkan and Fujairah before finally arriving in Ajman Corniche again, where the “Al Murabaa Watchtower” was adorned with the slogan “Together Forever”.

Al Shehhi, an Emirati social media activist, said he had been searching for an idea and a special initiative to celebrate Saudi Arabia’s National Day and carry a message of love, appreciation, and support for the Kingdom and its leadership, government, and people.

The trip represented a sincere and transparent image that reflects the depth of the current historical relations between the United Arab Emirates and Saudi Arabia, he added.