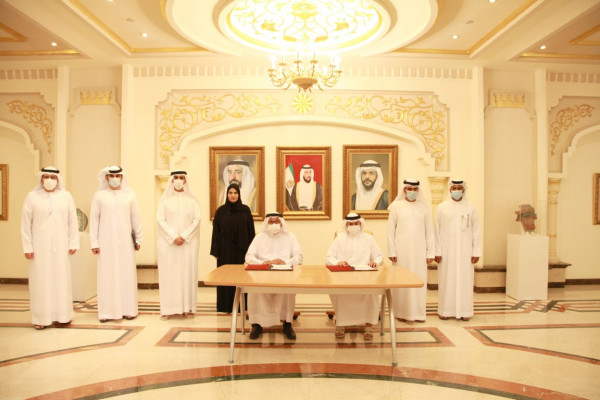 SHARJAH, 18th October, 2020 (WAM) — The Sharjah Consultative Council, SCC, and Sharjah Department of Statistics and Community Development, DSCD, have signed a cooperation agreement at SCC’s headquarters to strengthen collaboration when preparing statistical plans aimed at serving development programmes in the Emirate of Sharjah.

Ali Mehad Al Suwaidi, Chairman of SCC, and Sheikh Mohamed bin Humaid Al Qasimi, Chairman of DSCD, signed the agreement, in the presence of heads and members of both sides.

The agreement between the two sides includes strengthening cooperation in many areas, to improve joint cooperation, extend cooperation in technical fields, support the coordination process in the areas of information, exchange expertise and statistical data, and develop statistical work.

The cooperation agreement also called for cooperation in conducting studies, joint projects, statistical surveys and the development of a comprehensive statistical system for the emirate, as well as exchanging expertise and training, with the aim of reaching a long-term strategic partnership to achieve the cooperative goals.

The agreement stipulated that the cooperation will be in the field of studies, research and community development plans, in order to update the descriptive data, according to international standards and in line with the statistical system in the UAE.

Additionally, the cooperation agreement includes conducting periodic surveys to measure the public’s views regarding the initiatives, studies and future plans for SCC. The agreement would also work to facilitate the exchange of statistical data for both sides through participating in the preparation and development of specialised systems and programmes.

The cooperation agreement sets out the directives of H.H. Dr. Sheikh Sultan bin Muhammad Al Qasimi, Supreme Council Member and Ruler of Sharjah, on the necessity of cooperation among agencies with common goals in all fields, which is reflected in the service provided to the Emirate of Sharjah, and meets the needs of citizens and residents.

For his part, Ali Al Suwaidi praised the importance of such agreements that contribute to achieving the strategic objectives of the Council, within the framework of the continuation of the supervisory and legislative role of the Council, and in a way that serves the Emirate of Sharjah and fulfils the aspirations of the wise leadership.

He expressed his appreciation to Sheikh Mohamed Al Qasimi and to all the department’s cadres for their cooperation and keenness to promote common aspects of work in a way that serves the supreme goals and the wise directives of the Ruler of Sharjah.

For his part, Sheikh Mohamed bin Humaid Al Qasimi highlighted the importance of the agreement, which reflects the department’s continued success in achieving its objectives, as it is the only official source concerned with collecting and disseminating statistical data for the Emirate of Sharjah.